The two French doors lead to a porch and a “patio”. They were added to extend the living space of the dining area into the yard. Faulkner would often type on the patio. The large painting was done by his mother, Maud Butler Falkner. The two narrow doors on the left lead to a pantry and the kitchen. 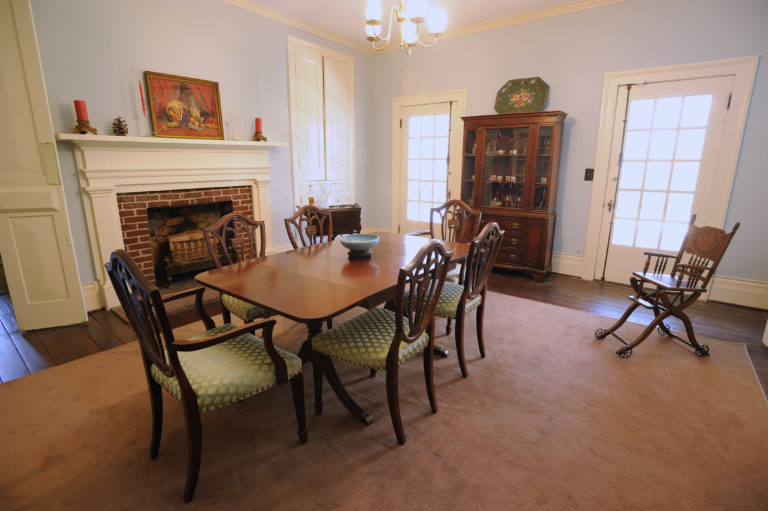 This room’s walls were originally covered with wildlife murals done by Ellen Bailey. Faulkner whitewashed the walls, then plastered and papered them.

Faulkner built the bookshelves himself, building in locking compartments on the bottom to store his shotgun shells. Manarz, a Brazilian artists who was a pupil of Jean Arp, gave the sculpture on the table to Faulkner. The bust of Don Quixote was acquired in Venezuela. Faulkner wrote in this room until he built his own writing room at the rear of the house. 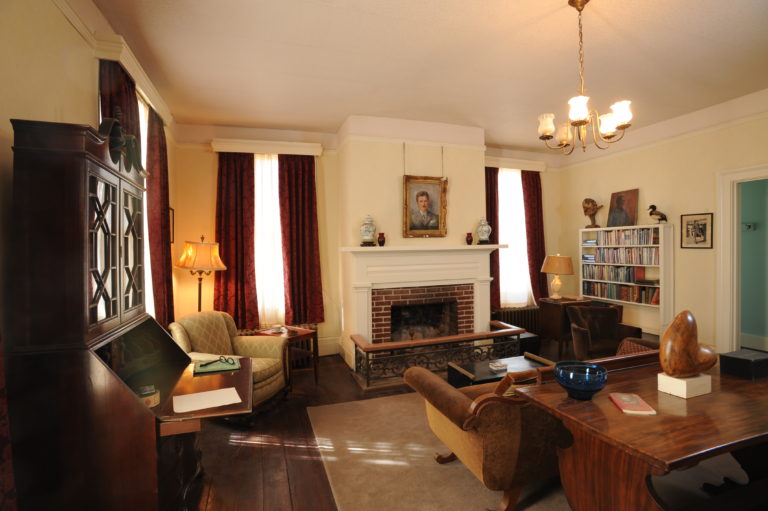 This room was the site of many special occasions for the Faulkner family, including the wedding receptions of his daughter, Jill, and niece, Dean. The funeral viewing for Caroline Barr, Faulkner’s “Mammy”, took place here in 1940. Faulkner’s own funeral was held in this room. The Chickering piano was Estelle’s, and her sheet music collection was stored in the cabinet beneath the Japanese doll brought back from Faulkner’s Nagano visit in 1955. The gold-framed portrait of Faulkner in his riding habit is an oil-painted Cofield Studio photograph. 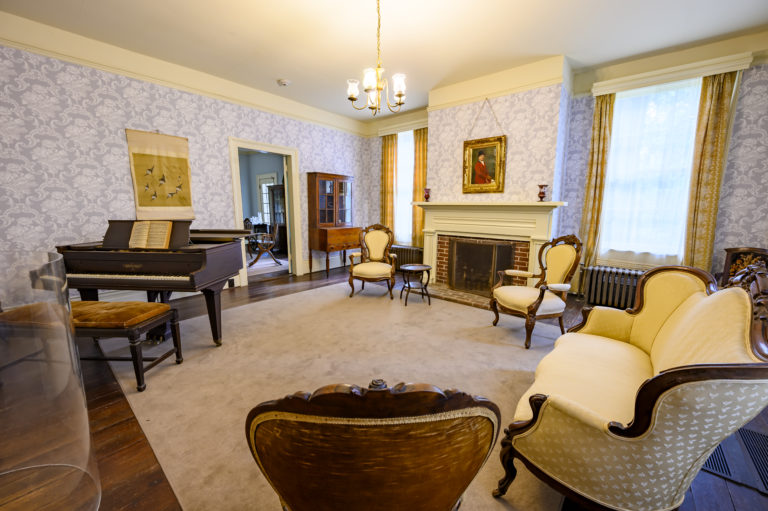 Faulkner built this room after 1950. The plot outline of A Fable is written on the wall in Faulkner’s hand. He used graphite pencil and a red grease pencil to set down this working plan for the novel, which is about Holy Week set during World War I.

The outline is similar to the storyboard techniques he used when he was a screenwriter in Hollywood. The small table where the typewriter rests was given to him by his mother. He used it virtually all the years he lived at Rowan Oak, sometimes moving it outside with one of the Adirondack chairs to enjoy the outdoors while he wrote. To the left of the door is a small fold-top desk made by Faulkner and his stepson, Malcom. 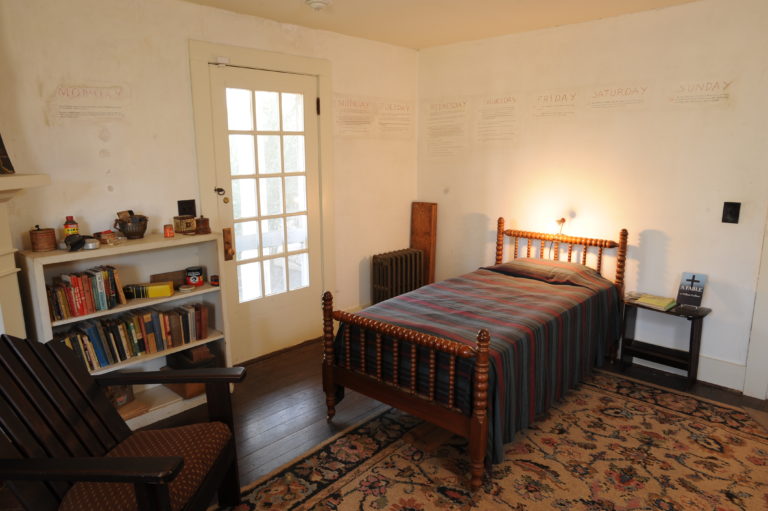 The Back Hall was once a screened in porch. William Faulkner remodeled this area and made it into a hallway around 1954. In addition to this, he added a bathroom, a closet, and his  office. Mrs. Faulkner refused to paint or decorate this area because she was not consulted on this remodeling effort, which occurred while she was abroad. 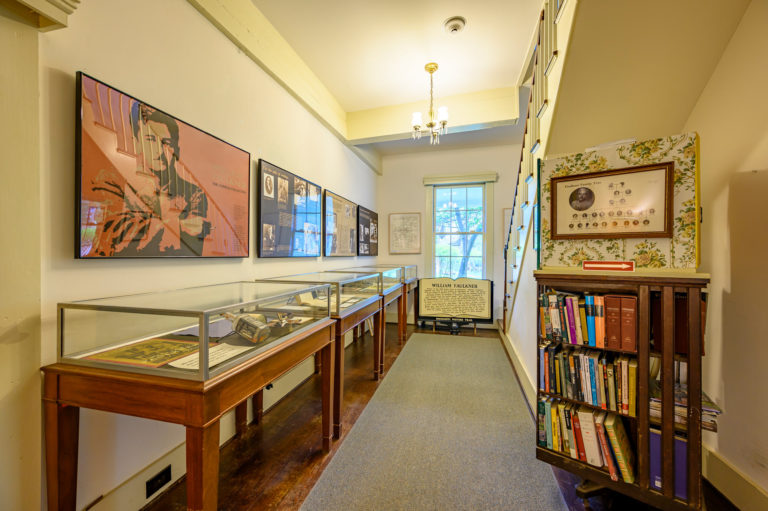 The pantry and kitchen were added to the house in 1910 and outfitted with modern appliances circa 1954. On the left side of the pantry, you can view the Faulkner family phone numbers written on the wall. Past the pantry is the kitchen, where Faulkner often wrote in the winter because it was the warmest room in the house. 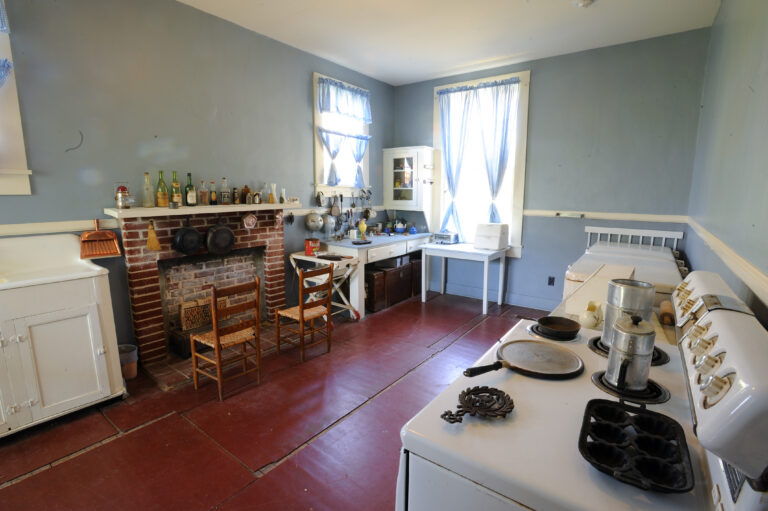 In 1934 Faulkner added this bedroom, and eventually it became Estelle’s. The windows provided exceptional light for painting and for bird watching, which she enjoyed. Her book collection reflects an interest in spiritual matters. Due to her husband’s dislike of air conditioning, the window unit was added the day after Faulkner’s funeral. 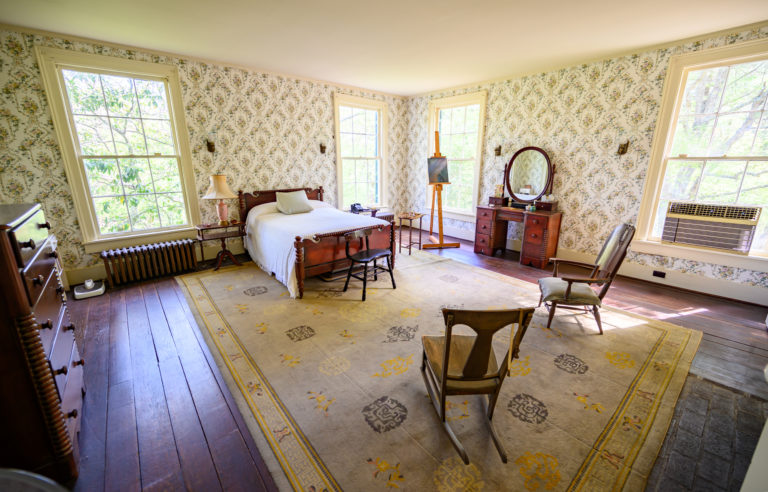 The number “64” on the mantel is an identifying number worn by him at a Virginia horse show. The books on his bedside bookshelf range from biographies to mystery novels, and reflect his varied reading interests. Faulkner enjoyed photography, and two of his cameras are on the mantel. His riding boots and field boots, along with a shoeshine kit, remain as testaments of his love for the outdoors, especially riding sports. 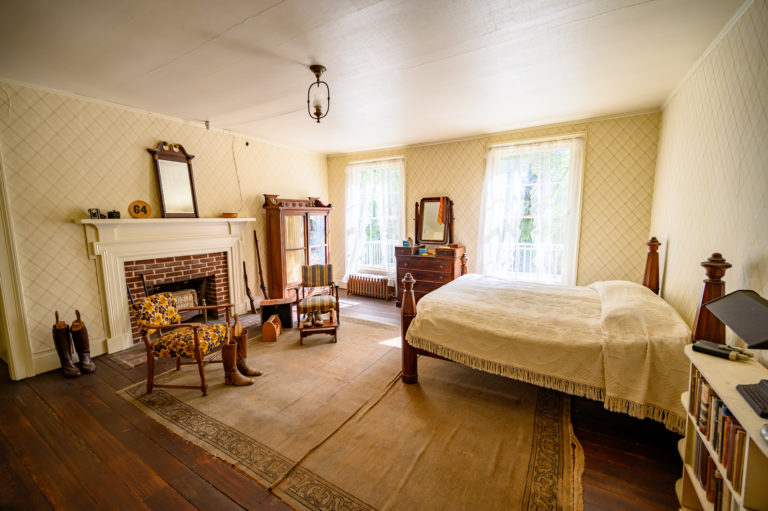 The portrait of Jill as a young girl was painted by her grandmother, Maud Butler Falkner. This was her bedroom until she left for college in 1952. 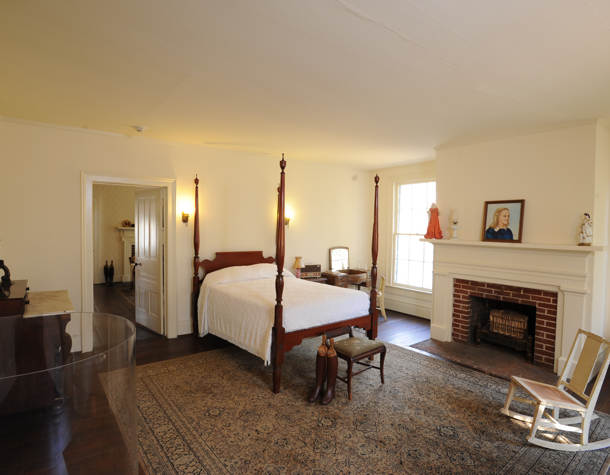 This was occupied by a number of children during Faulkner’s life. Estelle’s children, Malcom and Victoria, nephews Jimmy and Chooky, and his niece, Dean, all enjoyed Rowan Oak. Faulkner often entertained the children by telling ghost stories. One story was about a favorite fictional character, Judith Sheegog, who was unlucky in love and flung herself off the front balcony when faced with becoming an old maid. Faulkner told the children that she was buried under the magnolia tree in the circle garden opposite the house. Faulkner may have been trying to ensure that the children would exercise caution when on the balcony. 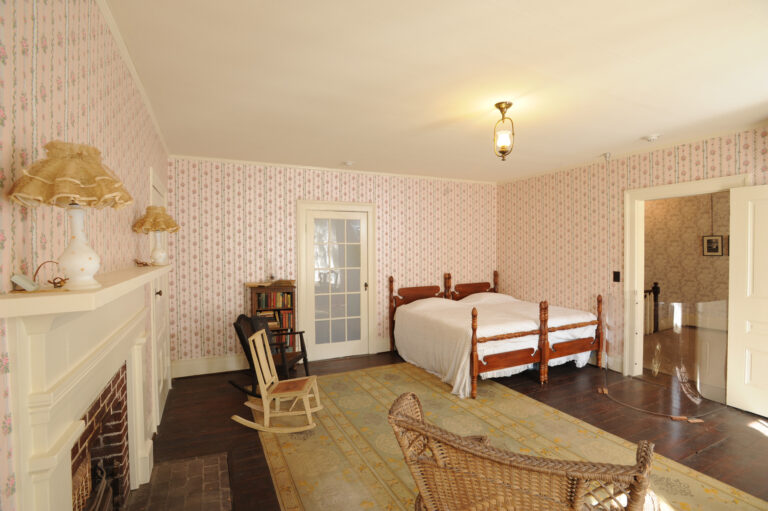 The second floor hallway was originally a sleeping porch, accessible by the back stairs. Around 1954, William Faulkner reconfigured the front staircase allowing you to go left instead of right only. The sleeping porch became a hallway and private entrances were created to each bedroom. Before this reconfiguration, the bedrooms were only accessible through Jill’s bedroom. 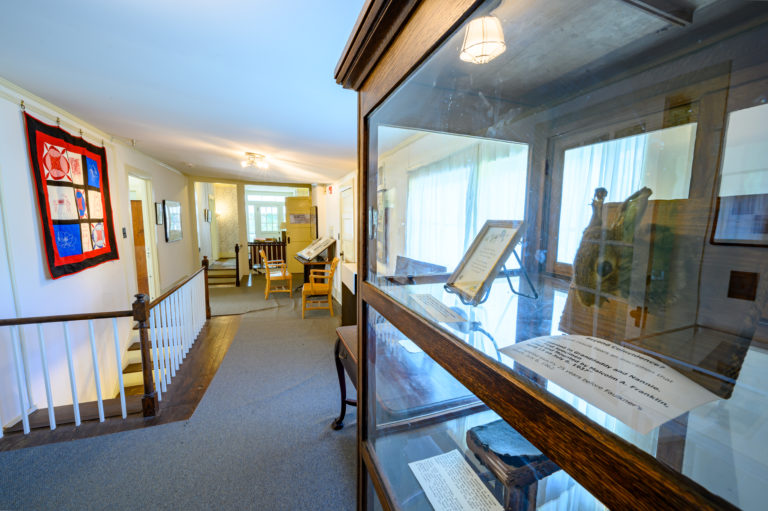 This space was added in the 1950s as a bathroom and sewing room. It now functions as a rotating art gallery.

Currently on View: The Other Sun by Jacob Hashimoto

For more information on this exhibit and others please visit the UM Museum website. https://museum.olemiss.edu/category/current-exhibitions/